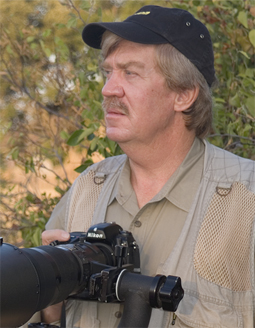 Steve Price is one of America’s best-known outdoor writers and photographers, specializing in outdoor recreation, travel, and nature photography.  He has been a fulltime photojournalist for more than 40 years, during which time he has written more than 3,500 articles for such publications as FIELD & STREAM, OUTDOOR LIFE, SOUTHERN LIVING, BASSMASTER, NATURE PHOTOGRAPHER, and many others.  He has written hundreds of additional features for various Internet web sites and his regular fishing column for Yamaha Marine is distributed to more than 700 media outlets.

His photography has won a number of national and international awards, and he has been both a semi-finalist as well as a finalist in the worldwide “Wildlife Photographer of the Year” competition sponsored by British Petroleum.  His photography has been used in books and promotions around the world and by organizations like the National Geographic Society, Reader’s Digest, Associated Press, Yamaha Marine, Ford Motor Co., Rocky Mountain Elk Foundation, and others.

Steve has traveled widely throughout the world, including five trips to Africa and six to South America, and has written 15 books, including the extremely popular “Valley of the Big Cats” and “Seasonal Guide to the Natural Year: Texas.”  In addition to his wildlife photography work, he serves as a Contributing Editor to FIELD & STREAM, and as a Senior Writer and Photographer for B.A.S.S.  In February, 2010, he was inducted into the Bass Fishing Hall of Fame for his contributions to the sport as a writer and photographer. In 2017 he was inducted into the Legends of the Outdoors Hall of Fame in Nashville.

He is available for assignment for writing and/or photography, and may be contacted at bookman785@gmail.com.